This latest trend in Crystal Healing with Men’s Jewelry is ….…. Well, not new.

In fact, Men wore jewelry first, not women.  There wasn’t really any distinction between Men’s Jewelry or Women’s Jewelry, because women didn’t have any. In antiquity, women were chattel, they didn’t have possessions, and they certainly didn’t own precious jewels unless they were given to them by a man.

Men have been wearing jewelry ever since they could pick up a stone, wrap a cord around it, and loop it over their neck.  So, if it is not new, perhaps the biggest question is WHY this latest surge in Jewelry for Men?

I don’t think it is a surge in Men’s Jewelry, or an isolated event.  I think of it as more of a home coming.   Its revitalizing a centuries old tradition. The trend is not really men’s jewelry as much as it is in going back to our roots, in everything.  It is part of our organic, simple, minimalist back to basics movement.

In the beginning, I mean the very beginning…like cave man, tribal, clans, warrior beginning…wearing gemstones was not for adornment. It served a purpose, it performed a function or was an expression of faith and beliefs.  To ward off Evil, to ward off physical disease.  To insure a better crop or better Hunt. To enhance Male fertility and the Kundalini – the life force. Jaspers were worn for Strength in battle, and to prevent bleeding.  Aquamarine was worn for Courage.  Black Stones were worn for Protection, both physical and spiritual. The most precious stones were worn to designate the Leaders.

It was also worn to brag, to show others of their conquests and success, and instill fear in their opponents.  At first it was just a Bear claw, a Tigers Tooth, a Shark Tooth. Or a gift given during a rite of passage, a family amulet or talisman, presented to one’s sons as he passed from being a boy, to becoming a man, or perhaps after his first battle or kill.

As time passed, jewels were used more and more as symbols.  Inlaid in Armor and Swords to bring strength and courage to the wearer, or to count coo, and display their past wins in battle. Jewels were also worn to commemorate, to honor, to designate authority, to reward military ability, to instill courage, and power in their leaders.

Every age and culture have, in some way, placed great importance in men’s jewelry. 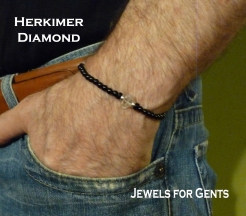 It wasn’t long before the gemstones that were rare, colorful, and large took center stage with the wealthy, the men in power, and leaders. Most depictions of leaders in antiquity are laden with jewels, from Tribal Leaders, to the Czars, the Kings and Lords of the 18th and 19th century, Bishops and Priests.

Tat tradition continues today in the modern world. Society is still full of men who celebrate their Conquests, affirm their beliefs,  and assert their Authority with jewelry. What do you think a medal is? The Olympics. The Blue Cross.  A Dog Tag.  A Cross.  A jewel that symbolizes and celebrates your birth or enhances your zodiac traits.  Celebrates your Marriage and symbolizes your un-availability to others. The bars or stripes that Captains and Generals wear. It’s a sign of valor, or symbol of service…but all are also pieces of jewelry.

So, whether you are wearing jewelry for its Crystal Healing Properties, or as a symbol of Marriage, Conquest , or Wealth, to celebrate a personal achievement, or as a declaration of one-person beliefs, or style, just know you are following a tradition as old as time itself.

Our Jewels for Gents Collection is made of the Highest Quality Sterling Silver, 14K Gold Filled, Pearls, and Gemstones.  Men’s Jewelry that is a worthy gift to commemorate a relationship, recall important moments, or celebrate any occasions in a man’s life.

Shop our Jewels for Gents collection:

We make Custom Healing Jewelry, and we can make something totally unique for you!

Snarky is my style, lol  *”Snarky” is used to describe speech with a specific emotional tone, typically a form of sarcasm informed by cheekiness and a mild, playful irreverence or impudence.

Start a Blog at WordPress.com.